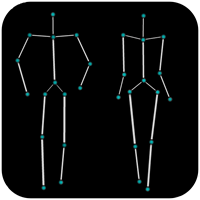 Human visual perception is highly adaptive. While this has been known and studied for a long time in domains such as color vision, motion perception, or the processing of spatial frequency a number of more recent studies have shown that adaptation and adaptation aftereffects also occur in high-level visual domains like shape perception and face recognition. 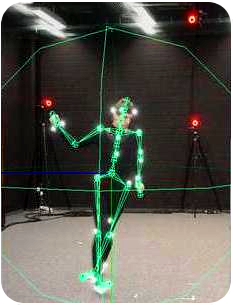 The Functional Significance of Head-Bobbing in Birds

Head movement of a walking pigeon is characterized by two alternating phases — a thrust phase and a hold phase. While the head is rapidly thrust forward during the thrust phase, it remains fixed in space during the hold phase. This is most liely an optokinetic response. However, it remains unclear why some bird species show head-bobbing while others can well survive without it. Furthermore, we don’t yet know whether the thrust phase has a visual function on its own. We are working on both these questions. 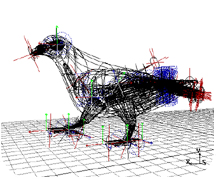 h Barrie Frost we have initiated a program on the neuroethology of conspecific recognition in pigeons. Pigeons do show robust courtship responses not only to real partners but also to video images. View an MPEG video (size 3.2 MB) of a male pigeon courting a female pigeon on the television.

This encouraged us to take this a step further and construct a “virtual pigeon” using high-level computer graphics tools (both  SoftImage and Maya). This gives us complete control about the actions and appearance of the model bird. Several versions have been developed so far.

In collaboration with Toru Shimizu we are conducting immunohistochemical studies to investigate which brain areas are involved in social recognition. Furthermore, we are constructing miniature FM telemetry units to transmit electrophysiological data from pigeons as they observe and socially interact with the virtual pigeon.

Using a Cyberware 3D laser scanner, I generated a data base of 3D models of human faces. The scanner records shape and texture of a face simultaneously and with the same resolution, so that each surface coordinate is registered with exactly one texture pixel. The surface points are sampled according to a regular grid in cylinder coordinates. Two neighbouring points on a horizontal scanline are 0.8 degrees apart. Two points on a vertical scanline have a distance of 0.615 mm.

Currently, the main database contains 100 male and 100 female faces of caucasian people aged between 20 and 40 years. The models do not contain hairs and the whole back of the head is removed completely. The faces are aligned in space in order to minimize the sum-squared distances between a selected set of features (such as the pupils, the tip of the nose, and the corners of the mouth).

If the texture is mapped onto the surface model, 2D projections result in images that look like colored photographs taken from the chosen angle. The surface models can also be rendered substituting the realistic texture by homogenous reflection properties and applying an illumination model. The following two animations show an example face rendered without texture and with applying the texture.

Images of the faces rendered from different viewpoints can be downloaded from the Web-page of the MPI for Biological Cybernetics.

Although remarkably robust, face recognition is not perfectly invariant to pose and viewpoint changes. It has long been known, that both profile and full-face views result in poorer recognition performance than a 3/4 view. However, little data existed which investigate this phenomenon in detail. We provide such data using a high angular resolution and a large range of poses. Since there are inconsistencies in the literature concerning these issues, we emphasize the different roles of the learning view and the testing view in the recognition experiment. We also emphazise the roles of information contained in the texture and in the shape of a face. The results of our same/different face recognition experiments are: 1. Only the learning view but not the testing view affects recognition performance. 2. For textured faces the optimal learning view is closer to the full-face view than for the shaded faces. 3. For shaded faces, we find a significantly better recognition performance for the symmetric view. The results can be interpreted in terms of different strategies to recover invariants from texture and from shading.

Bilateral symmetry of faces and its role in face recognition

The role of bilateral symmetry in face recognition is investigated in psychophysical experiments using a same/different paradigm. Our hypothesis is that the ability to identify mirror symmetric images is used for viewpoint generalization by approximating the symmetric view of a learned view by its mirror symmetric image. We could shows that generalization to the symmetric view is better, than generalization to otherwise different views. If the symmetric view is replaced by the mirror reversed learning view, performance further increases. We also showed that the match between the learned view and the test image is performed directly on the level of the images. Performance drops dramatically if the symmetry between the intensity patterns of learning and testing view is disturbed by an asymmetric illumination, although the symmetry between the spatial arrangement of high-level features is retained. We show that a simple image based model can explain important aspects of the data and we show how this model can be extended towards a general algorithm for image comparison.

Several models for parameterized face representations have been proposed in the last years. A simple coding scheme treats the image of a face as a long vector with each entry coding for the intensity of one single pixel in the image (e.g. Sirovich & Kirby 1987). Although simple and straightforward, such pixel-based representations have several disadvantages. We developed a representation for images of faces that separates texture and 2D shape by exploiting pixel-by-pixel correspondence between the images. The advantages of this representation compared to pixel-based representations are demonstrated by means of the quality of low-dimensional reconstructions derived from principal component analysis and by means of the performance that a simple linear classifier can achieve for sex classification. 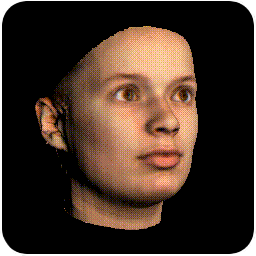 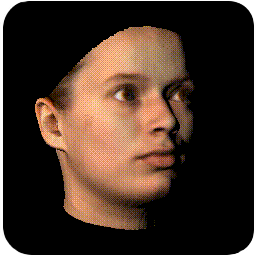